Good afternoon y’all, Sitting out on campus writing this on a beautiful day. Saw Elmo (and dad) earlier, so it can’t get much better than this. Set out today with the goal of not letting my weekly day off slip away, and it seems to be more or less on track with that (even though I failed to get up early today as I had wanted to). And yet, I’m late on this post.
Read more…
Sports are dumb. I love them all the same. Stupid Osweiler - $72 million and he can’t complete even a checkdown to one of the top 5 receivers in the league. Come on now. And yet I’ll watch again next week. Don’t even get me started on the Cubs. Seriously, that was ridiculous and I still haven’t gotten over it. Anyway, right, I’ve actually made some progress this week (unlike my dear Texans).
Read more…
Something has been bothering me since yesterday morning, y’all, and I’m not (just) talking about the flu-like symptoms from getting my shot for the year on Friday. I went to church again yesterday, but this time I went to that one that I felt was calling out to me the other week. I’m glad I went, but I don’t think I’ll be heading back. It’s just… not quite what I have in mind as my personal approach to the faith.
Read more…
Timestamp: Sunday, 23rd October at 22:46 How do weeks work? The Reddit bot tells me I’m at 24 days though, so I’ll take it. What a week, and where to begin…? I’m still game-free, thanks grad school! Seriously, being on campus until 9:30 or 10 every night is probably the number one factor in my success thus far. The urge to play a game is still there, lurking, waiting for me to lower my guard.
Read more…
Good evening, y’all. Notice anything different? Anything at all? About 90% of the changes this weekend were behind the scenes, but the more savvy of y’all - or those with a good eye - might notice a thing or two. (NB: those of you who get these posts in a feed reader might need to visit the site itself to find them) My main project this weekend, other than forensics homework of course, was moving this site to a new web host.
Read more…
It’s only Thursday and I can already tell this’ll be the toughest weekend yet for this whole project. The hype around Civilization VI is incredible - and I was right there with the rest of everyone on the internet for the last two iterations. Similarly, this time around it’s proving difficult to not get caught up in the excitement. I mean, listen to this. https://www.youtube.com/watch?v=WQYN2P3E06s This is my jam. I get damn near obsessive over this sort of music.
Read more…
Well that was annoying. Spent my writing time yesterday evening and then today sorting out what I thought was a weird DNS forwarding issue that made it look like the site was down for the count. After an email to my web host I thought maybe it was something with the settings - technically, I’ve got three potential sources for DNS to be screwy on this site. I should explain first.
Read more…
A rare second post on the same day appears! I just have to get this one out there while the spark of inspiration is there. In addition to maintaining this space, I keep a journal of sorts on a support group forum for folks trying to get past gaming as I have recommitted myself to doing lately. It’s not perfect by far, but the resources and community are a great resource.
Read more…

Another week begins. I was far, far too excited about my Texans coming back to beat the Colts last night to actually write anything, so here we go. Just when you count them out they come back and surprise you. They persevere. I mean, take a look at this: 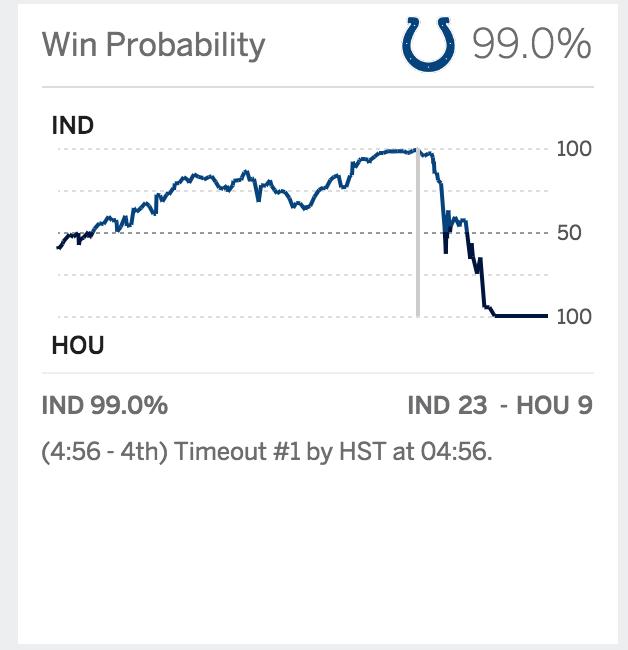 Statistically speaking, we had at best a 1% chance of winning at that point in the game. Makes sense when you’re down two scores going into the final five minutes, after all - I mean, there’s a reason people are calling it, alternatively, the comeback or the collapse of the year, depending on who you root for. And, well, if you follow the NFL at all, you know what happened by now.

I swear, I have some weird amnesiac voodoo … thing going on with football this year. Every UTSA game I’ve forgotten we were playing ended up a win - including Rice deciding to not go for two this weekend. I turned the game off last night at the half, and, well, look what happened.

Read more…
Saturday, 15th October 23:51 Have to use that German sometime, right? Today was very quiet for a Saturday. Too quiet. For some inexplicable reason, I just never felt quite right all day. Finally got back to playing Pathfinder aka good ol’ Dungeons and Dragons with the usual guys after taking a couple weeks off due to midterms. I was debuting a new character and all that - again - because mine keep dying for some weird reason, but even so I felt more of an outsider than I have in the two or three years I’ve known most of this group (and even longer for other members - over a decade in one case.
Read more…
« 3/5 »